Hannah is making a short series of video essays about game modding as participatory media culture, focusing on the ‘Vinesauce Corruption Mod’ for Nintendogs. She has uploaded a prototype video and further developed her analytical framework.

In my comment, I told Hannah that her research and engagement with the subject materials has been thorough and comprehensive. I shared an academic research report about modding (Bostan & Kaplancali) that examines the psychoanalytical aspects of modding, including player motivations and intentions. I also talked about different types of modding, contrasting fun, “breaking” mods to practical, “fixing” mods. I’m hoping Hannah considers these approaches to analysing mods in her upcoming video essays. I gave some feedback for the video essay, suggesting more humor and the implimentation of an informal tone to match the fun, silly nature of the ‘Corruption Mod’. Finally, I recommended some outlets for help with setting up and using the ‘DeSmuMe’ Nintendo DS emulator to avoid future complications with capturing gameplay.

Tamara is writing a series of blog posts exploring Artificial Intelligence in video games, observing a variety of games such as Mario Kart and Fortnite. She has made two blog posts in total, and intends to create more while also updating her existing ones.

In my comment, I told Tamara that I liked her blog post format because it compliments her topic. My main point of feedback was that she could have chosen more suitable titles for exploring AI in video games, in particular Fortnite ‘Battle Royale’ does not have a clear use of AI technologies because it does not have NPC’s. I shared a variety of news articles and Reddit threads that list game titles known for good or bad AI implementation, and suggested that Tamara use the media archaeology approach in her analysis. I also shared a journal article (Michael Mateas) about expressive AI in video game design. I praised Tamara for making her blogs a multimedia experience with embedded videos and podcasts, and recommended she record her planned interview with a twitch streamer in a podcast format too. 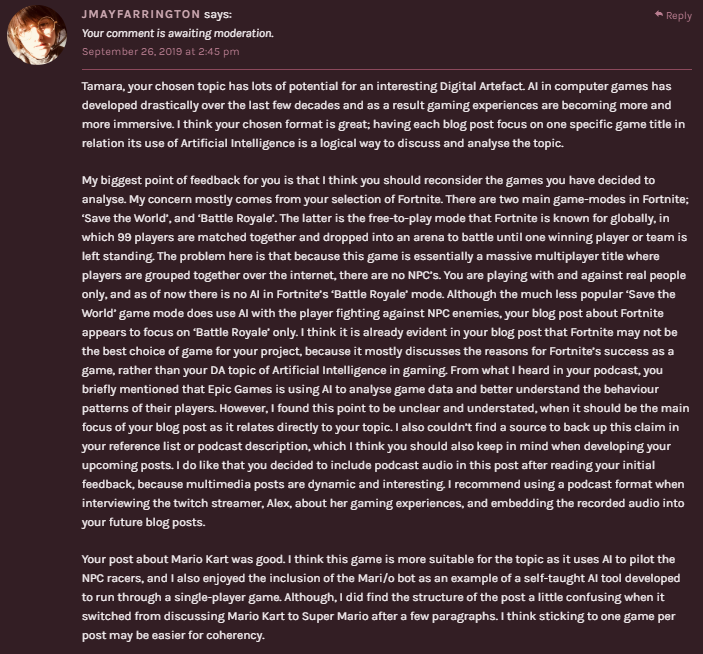 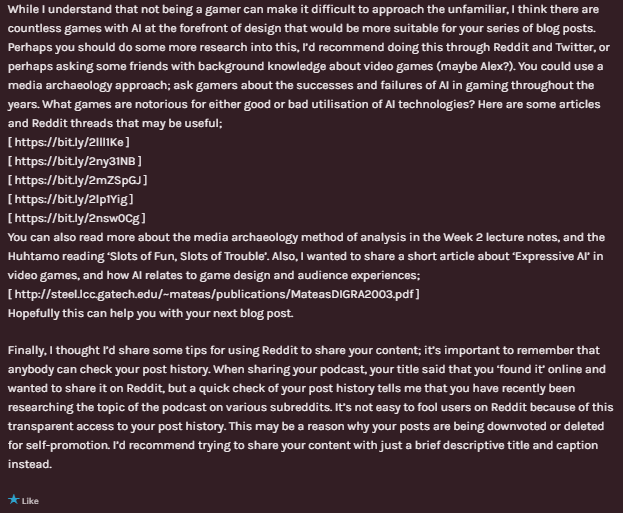 Serena is unpacking the role of nostalgia in either reviving popular video games, or potentially compromising their future development. She is using the divide between Old School RuneScape (OSRS) and the flagship RuneScape 3 (RS3) as an example. The DA will be one large multimedia blog post, and so far Serena has published a draft including a complete interview with an OSRS player.

In my comment, I told Serena that the primary research methods on her blog and beta video will be very effective in enriching her final post. I also complimented her main thesis of ‘re-birth or division’ in the RuneScape community, and cited similar cases where separate communities are developing around the new and old versions of popular MMORPG’s. I also commented on the prevalence of nostalgia marketing in the gaming industry in the released remakes of classic games and consoles. I gave Serena some general feedback about the formatting of her blog post, and shared a brief web article (Mark Hill) about the potentially risky patterns of nostalgia marketing in the gaming industry to help with her argument of nostalgia hindering a game’s future development. I did not suggest much for Serena about her DA’s direction because I was already impressed by the trajectory of her project. 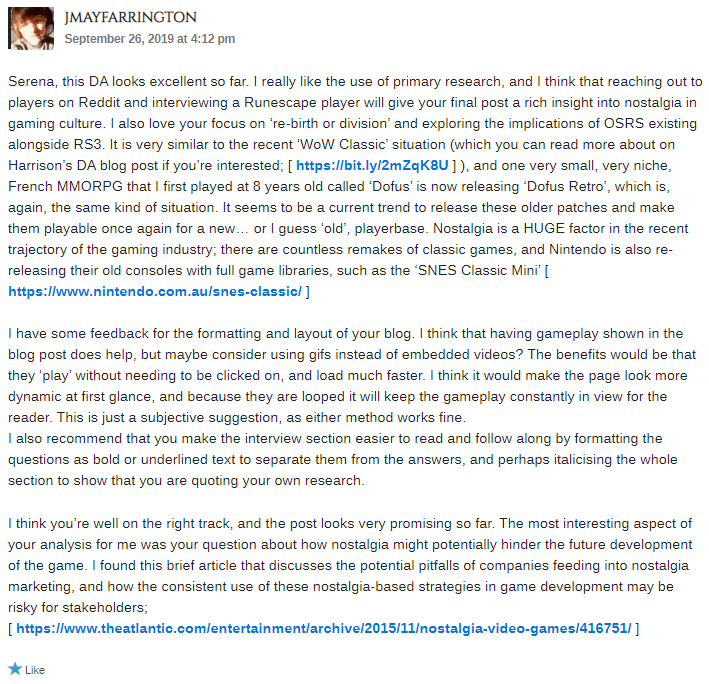 With this round of comments, I consciously attempted to make my feedback more brief and concise. I think I succeeded in posting shorter comments, though one comment may still be considered lengthy because I felt it was necessary to give comprehensive feedback in that case. I think my biggest improvement was that I focused on the direction of each person’s DA and offered suggestions for enhancing their projects, rather than my previous overly-analytical approach that mostly assessed the blog posts and videos based on the marking criteria. I also believe that I engaged with the subject materials and concepts more in my feedback this time. Most importantly, looking at other DA’s through a critical lens has allowed me to practice the essential skill of reflection and critique in the context of digital literacy. In turn, I will now be able to assess my own DA more effectively by applying the same method of review throughout my progress.

Communications and Media student at the University of Wollongong (NSW, Australia) Digital and Social Media + Marketing and Advertising. View all posts by jmayfarrington

One thought on “critical self-reflection of comments (part 2)”